For a broad and clumsy assessment of the acknowledgement Argentine art has received abroad in the last twenty years, a look at the large sums paid at auctions in New York at Sotheby’s and Christies for work by a few Argentine artists will do.   But this commercial approach is more of an anecdote than a thoughtful and relevant analysis.  It does not describe accurately the real place of these artists in the world.

Artists like Greco, Julio Le Parc, Victor Grippo, Xul Solar and David Lamelas, who have slowly made inroads into international art history, were not necessarily top priorities in the world art market in the 1980s and in the 1990s.  It is useful to remember that the price of work by artists relates to promotion and fashion rather than to quality.

It was not in the politically manipulated exhibitions of Argentine and Latin American art in the 1960s in the US, nor in the official art galleries in embassies or Latin American organizations in Europe and the US that Argentine art gained true appreciation. These spaces do not merit valuable critical acknowledgement as, for the most part, they are in charge of non-professionals in the art world, who have a rather parochial and nepotistic attitude toward who and what they show.

It was in the day to day interchange between artists and curators at home and abroad, and due to the opportunities and to the resources provided by foreign and local grants, exhibitions in galleries abroad, international publications, and by word of mouth that some of the best Argentine artists now in their 30s and 40s have become known abroad in the last fifteen or twenty years. This wider acknowledgement has reached the point where I feel that the role of the genial artist who lacks recognition in his own lifetime is démodé, a blurry and romantic destiny that does not apply in the late twentieth and early twenty-one centuries.  Not even in Latin America, and certainly not in Argentina.

This phenomenon of interchange and communication is global.  It relates to changes in the way artists work worldwide and to the way art critics and art historians in the so called First World opened their eyes to what non European or non US artists were doing.  In the twentieth century, up to the 1980s, the work by artists could still be placed within certain movements.  Because of this, as Jorge López Anaya, the well known Argentine art historian, has said, everything that artists outside the first world did was automatically considered a copy of what was being done in the major art centers, as for the most part they were working on the same lines.

But it is also true that the more progressive artists here were mainly focused on what their colleagues in the first world were doing.  In some cases, to an unhealthy extreme.

In the late 1980s the question of movements and separate disciplines within the visual arts gave way to many possibilities that could not be neatly placed into who was working in what style, as the very notion of style fell through. Also people the world over were beginning to think in terms of genetic and geographic roots, and the sense of belonging to a definite historical and geographical area became more important.  In Argentina, with few exceptions, the best artists were looking around their own habitat and into themselves to figure out their own creative resources.  Most of them were children of European immigrants, but by then Europe was no longer the ultimate goal, but a reference among others.

The period of the Military Government in Argentina broke the link between one generation and the next.  The then young artists had to look around them to learn what the world was about.  In their isolation, they found ways to work at home.   And because they felt strongly the loss of a missing generation and  lacked social communion with their native artistic elders, they looked up to them rather than to their foreign counter parts.

Jorge Glusberg, the director of the Museum of Fine Arts then, and a most controversial figure, should be also given his due, as as the founder and director of the CAYC –Centre for Arts and Communication- he held seminars, prizes, exhibitions to which he invited prominent foreign intellectuals who worked in different disciplines.  These encounters gave the visitors the chance to see what was happening here, and local artists the chance to talk to them.

When in the 1990s European and US curators took to travel around the globe, they slowly began to understand the import of what was then called multiculturalism.  This meant that art across the borders of the First World should no be understood as a cultural mirror of the more sophisticated West, but as different ways of working worthwhile watching.

Philippe Cyroulnik, who first came to BA in 1989, as a member of the jury for the Gunther Prize, invited Jorge Macchi, Roberto Elía, Martín Reyna and Pablo Suárez to show in the CREDAC -Centre Regional d'art contemporain- in Ivry-sur-Seine, France.  This was the first of his many trips to Argentina, and the beginning of a long association with Macchi, who has since then shown extensively abroad, as have done the others.

Greco from Buenos Aires and from Barcelona, Victor Grippo from Buenos Aires, Julio Le Parc from Paris, Liliana Porter from New York, David Lamelas from London, Paris, Berlin and mostly from Los Angeles, Leandro Erlich from New York, Jorge Macchi from Buenos Aires, are some of the names of the Argentine artists that are internationally known and respected as the best in their field.  They have become the visual and information network that represent us abroad and which has opened the way to their peers and to the new comers. 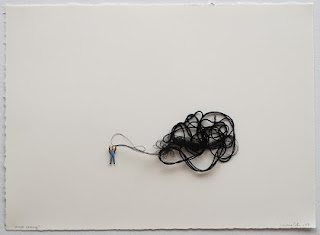