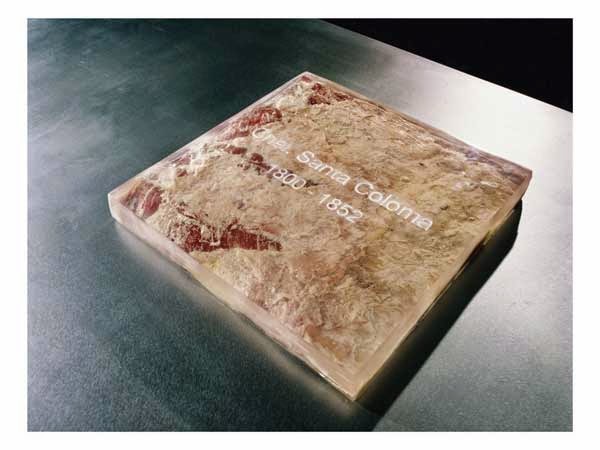 By Alina Tortosa
For the Herald

A quiet, soft-spoken artist, Cristina Piffer  (Buenos Aires, 1953) graduated as an architect to comply with the expectations of her immigrant parents.  But this profession did not provide for her the creative space she needed.  Ill at ease, she realized she had to withdraw from work that made her unhappy.  For one year she attended La Carcova art school in Buenos Aires.   Finding this institution restrained in its approach to creativity, she left after one year, but continued to meet regularly with Alejandro Puente, one of the teachers, who engaged his pupils in discussions on art that helped to open their minds.   Meeting with him and with fellow students was the sort of feedback she needed.  She also took lessons with Jorge Lopez Anaya on art history and on contemporary art appreciation.

A visit in 1989 to the San Paulo Biennial was a mind-boggling experience.  The sight of so much work by different artists, at a creative level far beyond what she had seen before moved and disturbed her.   She had to work out in her mind the meaning of so many different proposals that were as many possible approaches to working in the visual arts.

Her sense of identity and integrity were conditioned by what had happened during the last military government.  For ten years, as she worked on architectural projects, she was unable to translate this knowledge into artwork.  The streak of violence revealed by the methods the authorities had used permeated her thoughts and feelings; they modified her perception of life and caused her to take a deeper interest in Argentine literature and in Argentine history.  Piffer’s research did not cover only the recent past, but went further back to trace the traits of violence and exclusion that seemed to be part of national identity.    This knowledge, released from its original context, became the conceptual structure of her work.

A story by Borges, Hombre de la esquina rosada, struck a deep note in her.  To avoid the questioning of the police the villagers throw the body of the foreigner, who had died stabbed by one of them, out of a tall window into the river, Un envión y el agua torrentosa y sufrida se lo llevó.  Para que no sobrenadara, no sé si le arrancaron las vísceras, porque preferí  no mirar.[1]    This water, a source of energy and an inherent component of the ritual of cleanliness, defiled by the violence of the deed, reminded her of the bodies thrown into the River Plate by the armed forced during that time in Argentine history called  El Proceso, a title chosen by the main actors and doers in the military government themselves, implying that they were working on a regenerating process.   The name would become synonymous to cynical brutality.    This use of water as a natural hiding place for a corpse inspired a series of her pieces.

To find the material means that adapted to her preoccupations she tried different elements and different media.  She found raw meat the material that expressed better her concern with native idiosyncrasies that relate to sadistic practices.   The following step was to find the right cut and the means to keep meat fresh.  After trying several processes, Piffer discovered that if meat is kept in the refrigerator long enough, it loses its humidity slowly and does not go bad; keeping the fresh look she wanted.  Matambre, a thin, long layer of meat proved to be the perfect cut.   Once it is as dry as cardboard, the artist puts it between two squares of transparent resin.  The combination of the red meat and the fat through the resin gives it a glossy look, a sort of marble-like surface that is very elegant.  Piffer has named these pieces after different men beheaded either by the followers of Juan Manuel de Rosas or by his opponents the Unitarios in the nineteenth century.  She has also worked with tripe to knit tresses that she displays gracefully, as one would jewels.

In her lonely spiritual voyage to find out what had shaped our character into this willingness to run amok into sadistic practices under cover of law and order, she learnt that cruelty and violence had not been distinctive of one particular party.  The impulse to do away with one’s enemies had been shared by the “good” and by the “bad”.  Some parties had appeared more civilized than others, but this so called civilization did not run deep.  It had been mostly isolated individuals who had stood up to violent practices rather than political groups.

By following this line of work in which she deals with raw meat to represent historic characters that were beheaded in the eighteenth and nineteenth century, Piffer has traced the genealogy of violence among us, drawing attention to the need to detect and prevent discriminating criminal practices from people in authority. This gives her work, again drawing from religious ritual, a sacramental value.

[1] A push and the suffering, torrential water carried him away.  I do not know whether they had pulled out his entrails, I preferred not to look on.
Publicadas por Alina Tortosa a la/s 05:12