On the essence of poetry - work by Alfredo Prior

By Alina Tortosa  / For the Herald

On the essence of poetry - A retrospective of Alfredo Prior

There is nothing like a retrospective to confirm or to question an artist’s achievement. Isolated work and partial exhibitions are symptomatic and symbolic of an artist’s talent and coherence, but it is in a retrospective that we can seriously determine whether he holds his own or not as a visual artist.

Tribulaciones de un chino en Roma y otras tribulaciones sobre papel (Tribulations of a Chinaman in Rome and other tribulation on paper), the title of Alfredo Prior’s (1952, Buenos Aires) current retrospective at the MAMba, gives us the cue to the low keyed erudition and graceful ironic narrative that runs through Prior’s work. A typical example of his roundabout shrewdness is typified by his proposal to publish excerpts of previous interviews when asked to write a few lines for the catalogue.  This allowed him to choose exactly what he wanted to carry across to the reader, creating a certain distance from himself as author of what he had said, due to the past quality of the interviews.

The work dates from 1982 to 2002. There is the series Osarios  (1982-1984)– his “Bear series” painted in muted warm colours in small sizes that would grow into large vertical compositions much later. The painter and his model, The beginning and the end of the snow, Atlas, Siberia Blues, Saint Anthony’s temptation represent his narrative work. In the Chinese hairdos, Scenes from a Chinese Restaurant in the Stone Age, pencil, silver marker and Chinese stamps (ivory and rubber) and Complete Chinese Operas series the author works with blank space to create subtle and refined compositions. In the Sweeping the fallen leaves series, horizontal compositions in ink and gin tonic on paper, Prior is at his most concrete, creating almost three-dimensional fields. Please, don’t miss the gin tonic detail as medium. The layout of the exhibition, designed by Laura Buccellato, the museum director and by Prior himself, responds exactly to the austere refinement of his work. 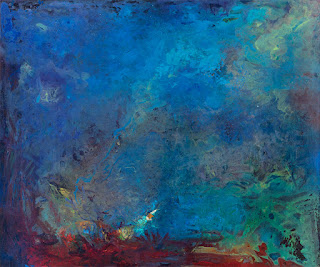 It is a beautiful and poetical exhibition.  Definitely, not to be missed.
Publicadas por Alina Tortosa a la/s 07:50